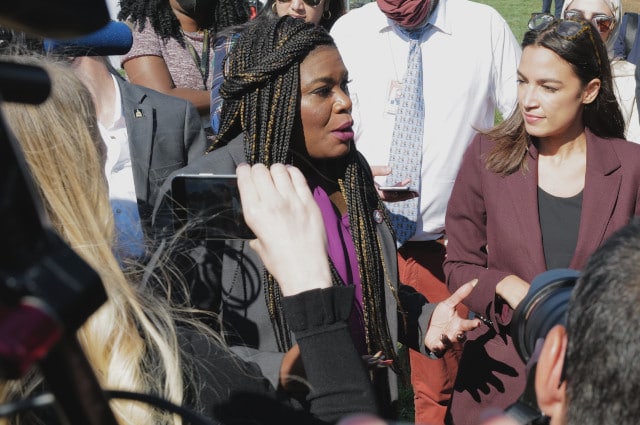 (Republican Insider) – Democrats have proven time and time again to be certified, compulsive liars. They will lie about anything in order to push their warped, anti-American agenda. They’ll lie even if actual facts can be easily accessed disputing them. Their lies are obvious and blatant and they have no shame.

House Rep. Cori Bush (D-MO) is no exception. She’s a racist and uses lies to twist reality in order to perpetuate the fantasy that white Americans are violently racist and want to literally see black Americans dead.

She’s sick in the head and her hate for white people has contributed to the deep divisions affecting the US today. You have to wonder if he actually believes her own lies or if she’s just a Marxist intentionally sowing discord.

On Monday, Bush attempted to take a jab at Kyle Rittenhouse with a totally false and easily fact-checked claim. She asserted that when she and other Black Lives Matter protesters marched in Ferguson, Missouri back in 2015.

She claimed they were shot at by “white supremacists” who have “never faced consequences” for attempting to murder them.

“When we marched in Ferguson, white supremacists would hide behind a hill near where Michael Brown Jr. was murdered and shoot at us,” Bush claimed. “They never faced consequences.”

“If Kyle Rittenhouse gets acquitted, it tells them that even 7 years later they still can get away with it,” she added.

When we marched in Ferguson, white supremacists would hide behind a hill near where Michael Brown Jr. was murdered and shoot at us.

If Kyle Rittenhouse gets acquitted, it tells them that even 7 years later they still can get away with it.

Bush is seriously unstable and lives in a complete fantasy world. The reality, as pointed out by journalist Andy Ngo, is that the “white supremacist” shooter was actually a black man named Jeffrey Williams and he was actually shooting at the police, not the BLM protesters.

“Jeffrey Williams was arrested, charged and convicted for that shooting during the protest/riots,” Ngo said. “He was aiming at police and shot two officers.”

This is false and ignominious. Your colleagues should condemn you. Jeffrey Williams was arrested, charged & convicted for that shooting during the protest/riots. He was aiming at police & shot two officers. pic.twitter.com/qIx0qsxcyX

The St. Louis Post-Dispatch reported in March 2017, that Williams had been sentenced to 25 years for the shooting.

Where does Cori Bush get off making these absurd and completely made-up assertions? Then to say that if Rittenhouse gets acquitted it’s proof that white people are still being allowed to kill black people in America is truly outlandish and unfair.

Black radicals like Bush only want Rittenhouse’s head on platter, they don’t care about the details and truth about what really happened in the Rittenhouse situation. Everything for racists like Bush are just black and white, (no pun intended).

Bush’s only goals are to create further division in the US and create chaos, bedlam, and riots when the verdict doesn’t go the way she and fellow Marxists think it should.

It’s really truly sick. One has to wonder how on earth Bush has even been elected to represent Americans. She’s a blatant liar and as radical as they come.