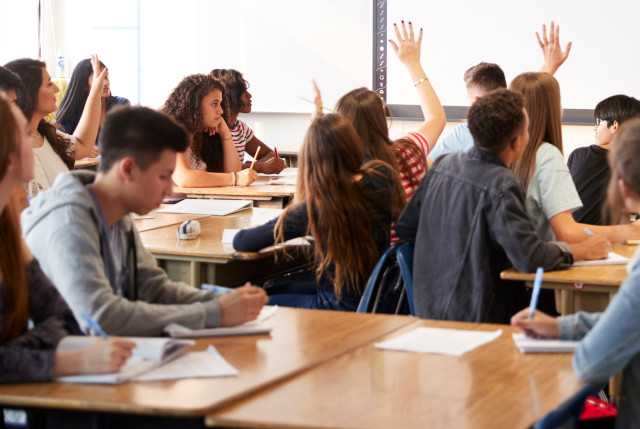 (Republican Insider) – We live in a sick and twisted time in our society. There are folks in modern culture who want you and your children to accept all manner of sexual deviancy as normal human behavior. Not only do they want you to accept it, they want you to celebrate it, as if perversion should be the standard and heterosexuality the outlier. We’ve witnessed the radical left teaching our kids in public school about sexual topics and gender identity at ages where they are far too young to be concerned about such things.

When all of this started happening many folks, particularly conservatives, issued a warning that this was a slippery slope and that the progressives would soon try to normalize pedophilia. The vast majority of culture said that was nonsense and that we were just fear mongering.

Turns out we were right.

A teacher from El Paso, Texas was recently told about her “proposed termination” after she told her students not to call people who are sexually attracted to children pedophiles, but to refer to them as “minor attracted persons,” which is about the most disturbing piece of politically correct garbage ever concocted in the history of human society. However, Fox News says there are witnesses who claim that the teacher’s remarks were taken out of context.

The report revealed, “In an 18-second clip shared on TikTok, the Franklin High School teacher, identified by the El Paso Teachers Association as Amber Parker, can be heard telling students they’re not allowed to label’ individuals’ as pedophiles. She reportedly made the comment during a lesson on the play, ‘The Crucible.'”

“We’re not gonna call them that,” Parker told her students in the video clip. “We’re gonna call them MAPs, minor attracted persons. So don’t judge people just because they wanna have sex with a 5-year-old.”

Texas Teacher is heard saying,”Stop calling them that. You’re not allowed to label people like that. Stop it, Diego. We are not going to call them that.We're going to call them, MAPs.Minor Attracted Persons. So don't judge people just because they want to have sex with a 5yr-old” pic.twitter.com/kuJ31caIYv

The first thing that immediately pops into mind is that perhaps Amber Parker herself might either be struggling with an attraction to young children or knows someone who is. Why would it be offensive to call someone who wants to have sexual intercourse with children as a pedophile? That’s what they are. And to be honest, I can think of a whole lot worse names and phrases we could use to refer to these sick, twisted perverts.

Fox News said that Parker was first suspended for her comments. However, El Paso’s Independent School District board of trustees then voted unanimously to deliver a solid boot to the twisted teacher’s backside and leave her sitting on the curb.

“On the evening of August 29, 2022, the El Paso Independent School District was made aware of a classroom situation and promptly initiated an investigation,” El Paso Independent School District Chief Communications Officer Liza Rodriguez said in a statement to Fox News Digital. “After a thorough investigation was conducted, on September 6, 2022, during a Special Board Meeting, the Board of Trustees approved a decision to notify a Franklin High School teacher of proposed termination. The process will continue in accordance with the Texas Education Code. Any allegation of potential misconduct is investigated thoroughly, and the safety of our students is a top priority. As this is a personnel matter, no further information will be shared at this time.”

However, there are a few individuals who are coming to the teacher’s defense. Several of her students who were in the classroom have said that her comments have been taken out of context.

“She [teacher] was expressing how it was ridiculous how we [society] might not be able to call people pedophiles. That we [society] will probably have to start calling them MAPs because it can be offensive to them [pedophiles]. The class agreed,” Ryann Ruvalcaba, a junior at Franklin High School, went on to say during a chat with KFOX.

The vice president of the El Paso Independent School District Board, Daniel Call, revealed that lesson plans are approved by administrators, but apparently Parker “strayed” from the plan during this particular class.

Before the unanimous vote to fire Parker, he had offered the teacher the benefit of the doubt, going on to say that the video clip seemed to remove some important context, noting it seemed that Parker was only “pretending” to be an advocate for this position.

“Update on my last post; After hearing from some of the students that were in the class, including my own nephew, I believe now that the teacher that appeared to be promoting and normalizing pedophilia was pretending to advocate a position she didn’t actually believe in order to challenge the students in preparation for them reading the [play] ‘The Crucible,'” Call said. “The video that many of us saw was missing this important context. I regret the negative attention that this situation has brought on this teacher and wish her well. I’m told she is a great educator.”

And yet, he still voted in favor of giving her the boot, going on to say, “Any reasonable person that heard what the seven trustees heard would’ve voted to terminate Amber Parker.”

Jason Parker, the teacher’s husband, spoke out in defense of his wife, saying her remarks were intended to challenge the kids in her class.

“Mr. Daniel Call I happen the [sic] be the husband of the teacher in question,” Parker stated in a post on Facebook. “I can tell you that we were shaken to the core about these accusations. It is both scary and disturbing that an edited 18 second clip could destroy a 30 year career when taken completely out of context. She is exemplary as a teacher and truly cares about the students. Needless to say we have spent many sleepless nights because of this cruel release to social media of the 18 seconds. We pray that you and the rest of the board will see this for what it is and not allow an edited video to destroy an innocent woman, her career and her family in the process. I want to thank you personally for the updated post to begin to right this wrong.”

So who are we to believe here? Was this just a poorly used example of a lesson and not an attempt by the teacher to push the acceptance of sexual deviancy? It’s the words of students against the actual comments of the teacher.

It’s true that this clip might have been ripped from the full context of the conversation. However, we don’t have the full lesson on video, thus making it difficult to know for sure what was meant. The lesson for teachers to take from this is not to use this sort of example in the classroom at all.