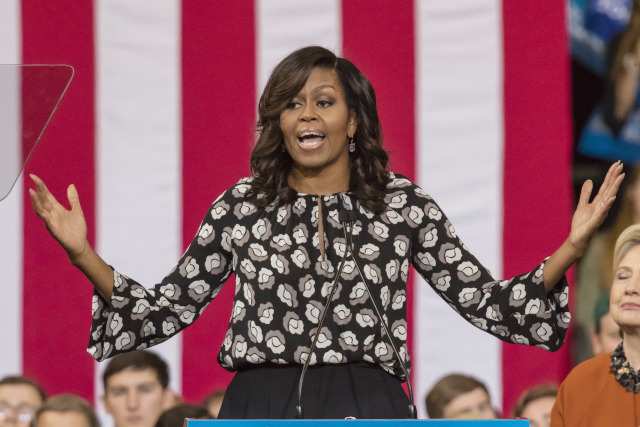 (Republican Insider) – There’s a lot of speculation that Hillary Clinton, Gavin Newsom, and even Amy Klobuchar could be preparing to run for president in 2024, and while these names certainly carry significant clout in the world of Democrats, one has to wonder why the party hasn’t been pushing the one candidate that could provide them with a seriously needed boost in the race:

Heck, the lack of discussion around the potential of Michelle Obama running for the White House seems sort of suspect at this point, wouldn’t you agree? It seems like such an obvious play.

However, according to WND, it’s not all that suspicious to Los Angeles filmmaker Joel Gilbert, who is the producer of the new documentary and book, “Michelle Obama 2024: Her Real Life Story and Plan for Power.”

“Fortunately for me, Michelle would never go into politics,” Gilbert quotes former President Barack Obama as saying. However, as Gilbert sees it, stealth is really at the heart of Michelle’s long-term strategy.

“Joel believes that Barack Obama and his co-conspirators have been grooming Michelle to run for president since 2016. As a first step, the power couple signed a $65 million offer to write their respective memoirs as soon as they left the White House,” the report goes on to say.

Gilbert reveals that this is a part of a pattern, especially since Barack launched his political career with a memoir, the infamous, “Dreams From My Father.” However, Gilbert points out, unlike “Dreams,” Michelle’s “Becoming” was a huge, huge success right off the bat, going on to sell more than 10 million copies and then being made into a film for Netflix.

“To promote the book, Michelle and friends like Oprah Winfrey launched an international arena tour whose attendance and receipts Beyoncé would envy. When not touring, Michelle appeared on every talk show this side of Alex Jones,” the report went on to say.

“Another tell-tale clue of the Democrats’ ambition for Michelle was their awarding her the coveted keynote speaker spot at the 2020 Democratic National Convention. In the way of parallel, Barack was the keynote convention speaker in 2004, four years before he emerged as the candidate in 2008,” WND’s report stated.

And, just like her hubby with Project Vote, Michelle started “When We All Vote,” which she now co-directs with the very obnoxious Stacey Abrams. Michelle, as of this writing, has more than 18 million followers on Facebook, 20 million on Twitter and almost 50 million on Instagram.

Gilbert’s slogan shows the vulnerability of Michelle as a candidate for the White House.

“Only the truth can stop her,” he says.

Yeah, the truth and Michelle Obama have a rather shaky relationship to say the least. Gilbert, in both the documentary and the book, makes the case that Michelle has been pretending to be something she’s not ever since she first came out on the national scene as her husband’s helper in 2004.

“From the beginning, Gilbert argues, Barack’s handlers have positioned Michelle as the ‘South Side’ girl, the descendant of slaves, the ordinary, everyday black working mom in contrast to her husband’s airy elitism,” WND reported.

“Unlike most pundits on the right, Gilbert pounds the pavement to get his story. With chutzpah to spare, he talks about Michelle to people most oppositional journalists would not dare approach, including her mother, her hairdresser and, perhaps most tellingly, Michelle’s thesis adviser at Princeton with whom he had three lengthy conversations,” the report said.

If the Princeton story is examined closely, you can see that it clearly speaks to the fraud that is at the heart of the political persona that Michelle has invented for herself. There have been numerous speaking occasions where Michelle Obama has talked about some unnamed “they,” which many have presumed to be a reference to the white establishment, discouraging her from her dreams.

“I wasn’t supposed to be here,” she went on to say to one audience after another, “a little black girl from the South Side of Chicago.”

During an interview on “CBS This Morning,” long long after the launch of “Becoming,” Michelle revealed very specific details with host Gayle King. The high school counselor “really didn’t know me.” She said during the interview, “Her assessment could have been … ‘hmmm, grade point average, yea, you’re a good student. Your scores are good. You’re black. You’re here in this public school. Maybe you’re stretching.'”

“Extrapolating from her own imagined slight, Michelle told King that if she were to go into a room of ‘black women or people of color’ and ask if someone had dashed their dreams, ‘Everyone would raise their hand.’ King, who is black, nodded in agreement,” the report revealed.

However, Gilbert did some excellent research and discovered that the alleged guidance counselor who discouraged Michelle from Princeton was actually a very highly touted and respected black female educator who was very close with the future first lady.

“And the counselor was right. Michelle was not Princeton material. Her test scores were not good at all. She floundered academically before finding refuge in Afro-American studies. Her godawful senior thesis confirmed her counselor’s caution,” the WND report said.

“To describe it as hard to read would be a mistake; the thesis cannot be ‘read’ at all, in the strict sense of the verb,” stated the late great Christopher Hitchens. “This is because it wasn’t written in any known language.”

Remember back when Barack Obama was running for office the first time around and promptly promised to bring the nation together and help heal racial division. He failed miserably? Well, Gilbert seems to believe that if Michelle does run for office she will threaten racial strife if she is not elected, prompting folks to vote for her in order to avoid mass chaos.

Gilbert is all set to hold a press conference and screening for his film on Monday, July 11, around 1 p.m. at the National Press Club in Washington, D.C. The brother of Barack Obama, Malik Obama, will be introducing Gilbert.