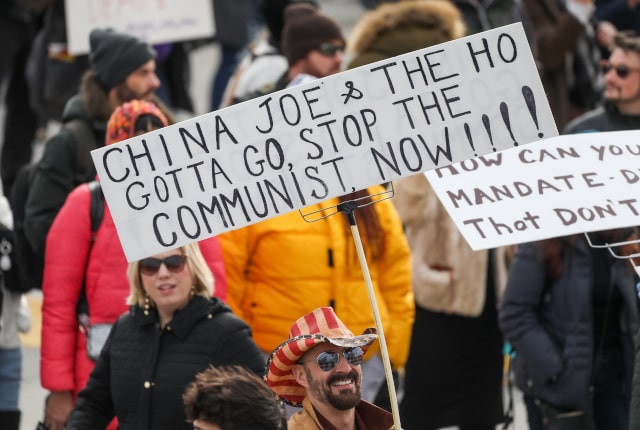 (Republican Insider) – One member of Congress has said that he is now beginning preparations for the impeachment of Joe Biden due to the crisis that he has created along the southern border by opting to toss out the security measures that were put in place by President Donald Trump, like the construction of a wall.

According to information from WND, it was Breitbart that reported Rep. Andy Biggs, a Republican from the state of Arizona, explained evidence needs to be collected and preserved for what could potentially happen later.

Members of the GOP are expected to earn some massive gains in the midterm elections this fall and take over control over the House of Representatives. Many folks are thinking that they will also become the majority in the Senate too.

“Biggs, in an interview with Breitbart, said both Biden and Department of Homeland Security Secretary Alejandro Mayorkas should be impeached for their decisions that opened America’s southern border to millions of illegal aliens,” the report said.

“Mayorkas has violated the law,” the congressman went on to explain, “That’s why I’ve introduced a resolution to impeach Mayorkas. He needs to be impeached, so does Joe Biden for what he’s done on the border.”

He then said, “We need to be preserving evidence now – preparing now – so that when we come to power in January, when we have the majority, we can begin with the investigations — and where necessary — the impeachments. They need to be held accountable for what they’ve done.”

Breitbart then went on to explain that Biggs added, “I’ve introduced resolutions to impeach Biden and Antony Blinken… because they’ve all committed high crimes and misdemeanors. We face the wall, not of Mr. McCarthy [who] has said that he thinks that we need to be looking into the same things I just was talking to you about. But I want to be preparing now. We’ve got to be preparing now and pushing this now…”

The congressman stated that one of the grounds for the impeachment would be that “ICE Air” — federal government aircraft — are being used to help transport illegal aliens all over the United States.

According to a report from BizPacReview, it’s not only Republicans that want to see Biden get impeached. A new poll found that a large percentage of Americans are fed up with him and his administration and want to see him booted as well.

“Some Republicans in Congress have endorsed articles of impeachment against President Joe Biden, citing his immigration policy and his failure in Afghanistan, among other reasons. Do you support or oppose impeaching President Biden?” new Rasmussen Reports and The National Pulse poll asked.

“Conducted January 26-27, 2022, the poll found 50 percent of likely voters support impeachment, and 45 oppose such a measure. While it may come as no surprise that 74 percent of Republican respondents are in favor, the 42 percent of Independents and 34 percent of Democrats supporting this action should cause great concern for the Biden administration,” the report said.

Majority think Joe Biden is one of the worst ever to hold the office, and rank him below his two immediate predecessors in the White House. pic.twitter.com/HTY6MaPXyP

Let’s hope we actually see some forward movement on this after the midterms.

Today, I introduced three impeachment resolutions against Joe Biden for his dereliction of duty in Afghanistan, his violations of immigration law causing a national security crisis on our Southern border, and his usurping of Congressional power by ignoring the SCOTUS. pic.twitter.com/77IMeJoowF

Joe Biden has put Americans last since the day he was sworn into office.

Again, he needs to resign.

Biden is emboldening our enemies and the American people are paying for it.

Biden, Harris, Pelosi, & Schumer should ALL resign in disgrace.

IF BIDEN REFUSES TO RESIGN, HE MUST BE IMPEACHED!

This is an absolute disgrace!

Biden’s physical inability to lead is not a political talking point – it’s a demonstrable fact.

Joe Biden is not mentally fit to serve as President of the United States.

I truly believe that he is unable to discharge the duties of the office he holds. pic.twitter.com/exu9QM5NRH

Joe Biden has blood on his hands.

The buck stops with the President of the United States.

This horrific national security and humanitarian disaster is solely the result of Joe Biden’s weak and incompetent leadership. He is unfit to be Commander-in-Chief.

The blood is on Joe Biden and his hapless administration. This human tragedy will not end until everyone responsible for this debacle is removed and held accountable. Resign or face impeachment. https://t.co/37eQDGxKEW

If President Trump can be impeached over a phone call, then the time has come to IMPEACH Biden for gross negligence in Afghanistan. Americans deserve better. We deserve better than someone who willfully IGNORES the WORST crisis in decades.

It’s clear the President is not up to the job, that his entire administration is willing to thumb its nose at the Constitution. Though Pelosi’s House will not hold @POTUS accountable, it’s incumbent upon House Republicans to call out his egregious violations of his oath of office https://t.co/lrQ3xZ75p3

President Biden must be held accountable for clearly unconstitutional actions, including willfully violating the separation of powers in attempting to extend a federal eviction moratorium. https://t.co/8tO4a8Oxfz

Reuters got transcripts of Biden's last call with Ghani + a Ghani/Sullivan/Milley/McKenzie call, all on 7/23.
-US side concerned about "perception" Taliban was winning and need to change narrative.
-Biden wanted Ghani to appear with Karzai. Ghani said no.https://t.co/bGhxAWTQ9M

Rep. Ronny Jackson (R-TX), who was Obama’s White House doctor, says that Biden needs to resign because he is no longer “cognitively prepared to be our president.” pic.twitter.com/QNwmeXkFhU