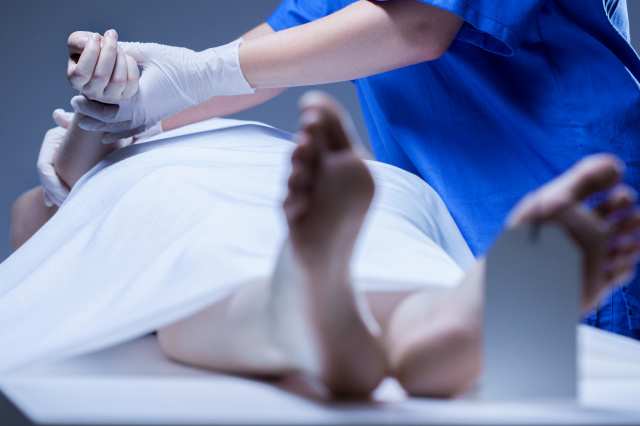 (Republican Insider) – There are countless reasons not to get the COVID shots; the number one reason being they don’t work. Aside from the fact that they don’t stop anybody from getting or spreading COVID, they also pose troubling dangers to peoples’ health, even healthy people.

Numerous embalmers around the country are speaking out about the post-mortem signs they’re seeing that prove just how dangerous the shots really are.

The Epoch Times reported that embalmers around the US have been observing “large, and sometimes very long, ‘fibrous’ and rubbery clots inside the corpses they treat,” and that they’ve been seeing them since either 2020 or 2021. This is highly disturbing.

Of course, it’s too early to conclusively attribute the new clot phenomenon to the COVID-19 shots but it seems pretty clear there is a connection.

According to the Epoch Times’ detailed report on the clots, they have received several photos and videos of the anomalous clots but were unable to share them online because of the level of gore.

The report explains that Mike Adams, who runs an ISO-17025 accredited lab in Texas, ran an analysis on the clots in August and found they lack iron, potassium, magnesium, and zinc.

“We have tested one of the clots from embalmer Richard Hirschman, via ICP-MS. Also tested side by side, live human blood from an unvaccinated person,” Adams said.

Adams is teaming up with other doctors and embalmers around the country and they plan to use their own money and resources to investigate the clots further and hopefully determine what they are made of and what is causing them.

According to the ET, “The string-like structures differ in size, but the longest can be as long as a human leg and the thickest can be as thick as a pinky finger.”

The presence of blood clots has been steadily on the rise over the last couple years, according to Alabama licensed funeral director and embalmer Richard Hirschman who has been in the trade since the 9/11 tragedy.

“Prior to 2020, 2021, we probably would see somewhere between 5 to 10 percent of the bodies that we would embalm [having] blood clots,” Hirschman told The Epoch Times.

“We are familiar with what blood clots are, and we’ve had to deal with them over time,” he said.

He says that now, 50 percent to 70 percent of the bodies he sees have clots.

“For me to embalm a body without any clots, kind of like how it was in the day, prior to all of this stuff … It’s rare,” Hirschman said.

“The exception is to embalm a body without clots,” he asserted. If that doesn’t give you the shivers, nothing will.

Wade Hamilton, a cardiologist who is familiar with clots, told The Epoch Times: “The fact that the magnesium, potassium, and iron are very low in the samples could suggest that they are not the usual post-mortem clots, that in fact there was no blood flow in these vessels. These structures raise but do not totally answer some interesting questions.”

“The combination of the low electrolytes and the novel very strong string-like structures suggests that these areas where the string-like structures are seen in the blood vessels did not receive circulation. They are not ‘normal’ post-mortem findings according to experienced embalmers bent on obtaining total body vascular access from one site, which because of the unusual ‘clots,’ they were unable to do,” he added.

The clots are making embalming much more difficult, forcing embalmers to drain blood via multiple points instead of a single spot.

“In 20 years of embalming, I had never seen these white fibrous structures in the blood, nor have others in my field. In the past year, I have seen these strange clots in many different individuals, and it doesn’t seem to matter what they die of, they often have similar substances in their blood. This makes me very concerned because if something is wrong in the blood, it begs the question: is something causing people to die prematurely?” Hirschman said.

“As the summer [of 2021] went on, COVID deaths were on the decline, but these clots were increasing in number. My suspicion is that the vaccine may be the cause of these strange clots. I realize that I am not a doctor nor am I a scientist, but I do know what blood looks like and I am very familiar with the embalming process that I have been doing for two decades. I do not know 100 percent what causes these clots, but I do know from my experience and through speaking with several other embalmers and funeral directors none of us had seen this strange clotting before.”

He also added that people aren’t dying from COVID and that there has been a massive increase of people dying from “sudden heart attacks, strokes, cancers. It doesn’t seem to matter what these people die of nowadays, so many of them have the same anomalies in their blood.”

“The blood is different. Something is causing the blood to change. And the whole purpose of me trying to come out was to try to say: look, something’s wrong. Let’s figure out what it is so that maybe we can find a way to help break this stuff down and save people’s lives,” Hirschman said.

“If it’s not the vaccine, fine! What is it? Let’s figure it out, because something is causing it and it can’t be healthy.”

Despite the red flags being raised by embalmers, don’t hold your breath waiting on the federal government to give their attention to it. Fortunately, there are good people out there who want to actually expose the truth, no matter what it is.

Let’s hope, for all of our sake, they are able to do it.