(Republican Insider) – Despite the fact that the 2020 presidential election was most certainly rigged and meddled with to the point of the results being completely different from what they should have been, partisan members of Congress are busy carrying on a Stalin-esque political show trial over the events of Jan. 6.

Completely ignoring the fact that the 2020 election was stolen, Democrats and a few politically-driven RINOs on the House committee investigating Jan. 6, held a primetime hearing Thursday night.

“So the Unselect Committee of political HACKS refuses to play any of the many positive witnesses and statements, refuses to talk of the Election Fraud and Irregularities that took place on a massive scale,” Trump wrote in a post on his Truth Social platform.

“Our Country is in such trouble!” Trump was at the center of the Thursday “hearing” which was totally biased and one-sided. Committee vice chair Rep. Liz Cheney of Wyoming blamed Trump for the events that transpired on Jan. 6, 2021, as she has done countless times since Jan. 6.

“Those who invaded our Capitol and battled law enforcement for hours were motivated by what President Trump had told them: that the election was stolen, and that he was the rightful president,” she said.

“President Trump summoned the mob, assembled the mob and lit the flame of this attack,” she added despite there being no proof of these assertions.

Video testimony was shown for numerous witnesses including Trump’s daughter, Ivanka Trump who served as an adviser to the White House under Trump.

“I respect Attorney General Barr, so I accepted what he was saying,” she said, referring to former Attorney General William Barr’s claim that Trump was never going to be able to prove his allegations of election fraud, Politico reported.

“Ivanka Trump was not involved in looking at, or studying, Election results. She had long since checked out and was, in my opinion, only trying to be respectful to Bill Barr and his position as Attorney General (he sucked!),” Trump posted on Truth Social. In another post on Friday, Trump responded to the allegation that he had supported calls from protesters for former Vice President Mike Pence to be hanged.

“I NEVER said, or even thought of saying, ‘Hang Mike Pence.’ This is either a made up story by somebody looking to become a star, or FAKE NEWS!” Trump said.

In a series of earlier posts, Trump slammed the sham House committee hearings, calling them a “one sided, totally partisan, POLITICAL WITCH HUNT!”

“The Unselect Committee didn’t spend one minute studying the reason that people went to Washington, D.C., in massive numbers, far greater than the Fake News Media is willing to report, or that the Unselects are willing to even mention, because January 6th was not simply a protest, it represented the greatest movement in the history of our Country to Make America Great Again.

“It was about an Election that was Rigged and Stolen, and a country that was about to go to HELL..& look at our Country now!” Trump wrote. Trump said he had wanted extra security for the massive rally that took place on Jan. 6 prior to the events at the Capitol.

“The Unselect Committee has now learned that I, as President, suggested & offered up to 20,000 National Guard, or troops, be deployed in D.C. because it was felt that the crowd was going to be very large,” he wrote.

“Crazy Nancy Pelosi turned down the offer, she didn’t like the way it looked. Likewise, the Mayor of D.C. Had they taken up the offer, there would have been no January 6th. … The hearing is another political HOAX to counter Inflation, etc.” 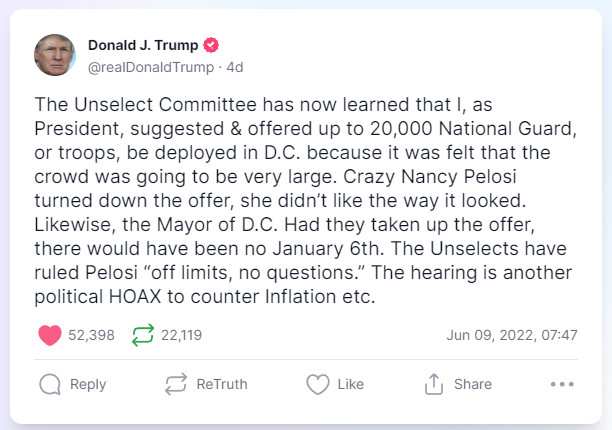 Trump also made a connection between the House panel and the disproven Russian collusion allegations made against his 2016 campaign.

“The Unselect Committee of political Thugs, essentially the same group who brought you the now fully debunked and discredited RUSSIA, RUSSIA, RUSSIA HOAX (and many others!), refused to study and report on the massive amount of irrefutable evidence, much of it recently produced, that shows the 2020 Presidential Election was Rigged and Stolen,” Trump wrote. “They want NOTHING to do with that topic because they cannot win on the facts. CANCEL & DENY, call it ‘THE BIG LIE,’ is all they can do. Corrupt Politicians!”

Trump’s absolutely right. Democrats don’t want to deal with the facts about the stolen election or Jan. 6. This is all a giant charade and the American people need to IGNORE IT.